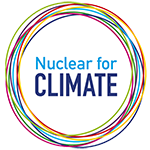 To limit the impacts of climate change, the world must rapidly reduce its dependence on fossil fuels to reduce greenhouse gas emissions. Nuclear energy is low-carbon and can be deployed on a large scale at the timescale required, supplying the world with clean, reliable, and affordable electricity.

Climate change has been identified as a defining issue of our generation,with the adoption of the Paris Agreement in 2015, which is to keep the rise in global temperatures to well below 2 °C compared to pre-industrial levels, and with the aim to limit the rise to 1.5 °C. Since then, increasing scientific understanding of the significant risks associated with warming of 2°C, along with increasing societal concern, have established the need for more urgent and ambitious action to avoid the worst impacts of climate change, by limiting warming to 1.5°C.

The impacts of climate change can already be seen, from exacerbating global poverty, water scarcity and food insecurity to severely impacting public health due to the spread of diseases, extreme weather events and the destruction of ecosystems.

To reach this goal, carbon dioxide emissions from electricity generation must fall to nearly zero by the middle of this century, even as electricity needs worldwide continue to grow and expand in end-uses such as transportation, heating and industrial energy use.

Nuclear energy has one of the smallest carbon footprints of all energy sources, and it is one of the largest low-carbon electricity generators globally. The use of nuclear power avoids more than two billion tonnes of carbon dioxide emissions per year, the equivalent of removing half of the world’s 520 million vehicles.

Nuclear energy can be deployed at the rates required to avoid the worst effects of climate change. This has been seen in countries such as France and Sweden, where a rapid expansion of nuclear power in the 1970s and 1980s contributed to a high degree of decarbonization of their electricity systems, whilst delivering substantial growth.